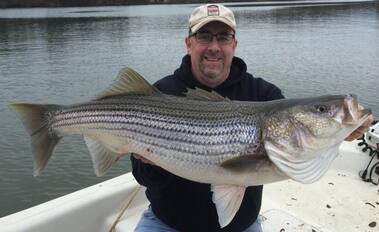 Mike Ward has had a passion for fishing since his early days on the river with a cane pole.   In recent years that passion has found its home fishing the waters of Smith Mountain Lake, VA for striped bass, and occasional trips out of state or to the Chesapeake Bay for the big girls - or to the salt for "old drum".

He is also Co-Director of the Striper Mafia tournament series - a series of catch-photo-release tournaments running since 2015, held primarily on Smith Mountain Lake, VA.


It was the desire for higher quality rods than the mass-produced rods with guides that broke all too frequently, along with the desire to express some creativity, and have something to stay close to fishing when not on the water, that led Mike to building custom rods.  While he spends the majority of this time pulling big live bait for trophy stripers, casting & jigging techniques are used frequently as well so he is well in tune with a variety of styles of rods and the needs to pursue a variety of species.

Mike's work has been featured on the cover of RodMaker Magazine in Volume 25,  Issue 3, in the Rod Builder Spotlight in the Summer 2022 issue of the Rod Crafters Journal, a publication of the Custom Rod Builders Guild, in the "The Mullet Minute" - a segment on Mud Hole Live's monthly web-show in February 2022, and by Anglers Resource in their "Fuji's Profiles in Rod Building" in March 2021, as well as having won multiple monthly challenges as selected by other custom rod builders on The Southern Rod Builders Facebook group.

Your custom rods are hand-assembled in our workshop which features an Alps power-wrapper, on a custom track-mounting system, and a custom quad rod-dryer built in-house which is electronically temperature controlled and enclosed to ensure the best outcomes in the rod finish.  Oh, and did I mention light?  Lots, and lots of light!

We also have a "dirty side" shop, where grips are custom fabricated and guide-feet are prepped.  Consisting of a 14" Delta band-saw, a 36" lathe for turning cork & EVA foam grips, a grinder for the guide feet or other polishing needs, an assortment of reamers to size the grips to your blanks, and other assorted tools needed for the craft.